Glycaemic control of QTERN™ compared with its DPP-4 inhibitor and SGLT2 inhibitor monocomponents.5,10 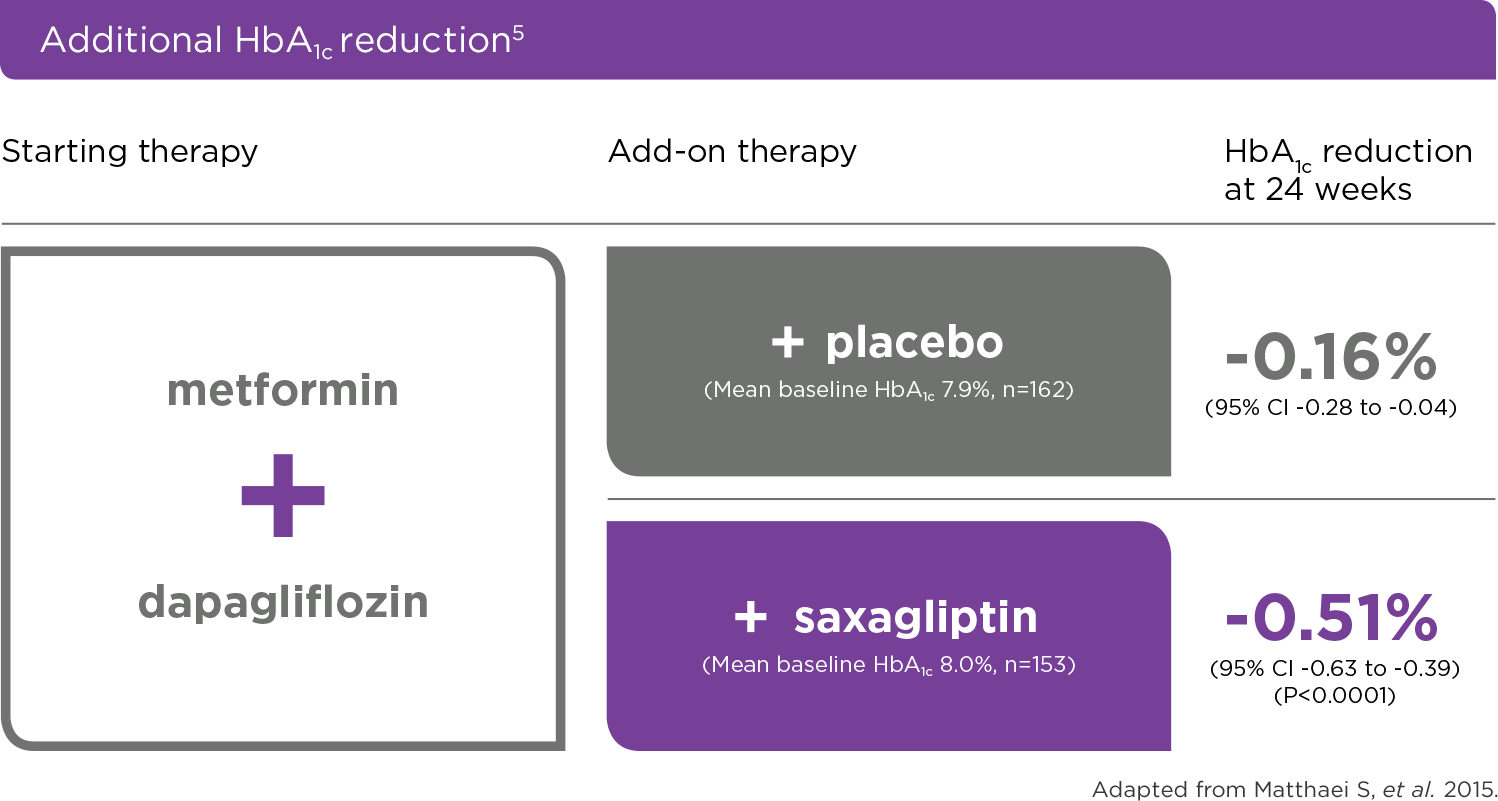 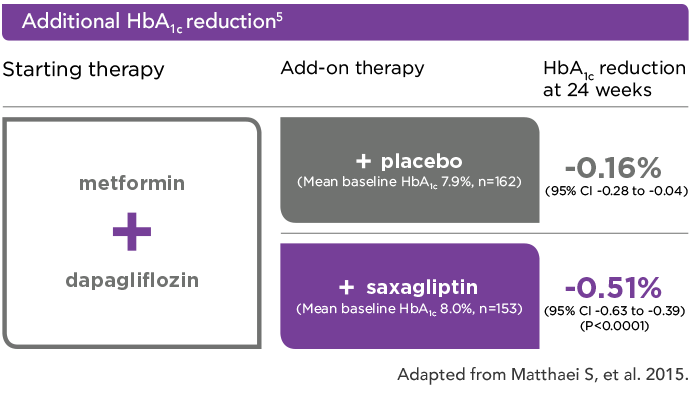 This was a multicenter, randomized, double-blind, placebo-controlled, parallel-group, phase 3 study. The study design consisted of a screening period and an open-label treatment period before randomization and a short-term (24 weeks), double-blind treatment period. Patients could then enter a longterm, 28 weeks extension, for a total of 52 weeks of triple-therapy treatment.

Patients with type 2 diabetes with glycated hemoglobin (HbA1c) 8.0-11.5% (64-102 mmol/mol) at screening and taking stable metformin immediate release (IR) or extended release (XR) (≥ 1,500 mg/day) for ≥ 8 weeks before screening were included. At the end of the screening period, patients were switched to 16 weeks of open-label treatment with the nearest multiple of metformin IR 500 mg and dapagliflozin (10 mg/day). For inclusion into the randomized, 24-week, double-blind treatment period, patients had to have an HbA1c 7.0-10.5% (53-91 mmol/mol) at week 2 of the open-label treatment period. Following the open-label period, eligible patients were randomized 1:1 using a centralized blocked randomization schedule and received placebo or saxagliptin 5 mg/day in addition to open-label dapagliflozin 10 mg/day and metformin IR for 24 weeks. Patients completing the double-blind period could enter the 28-week long-term extension. 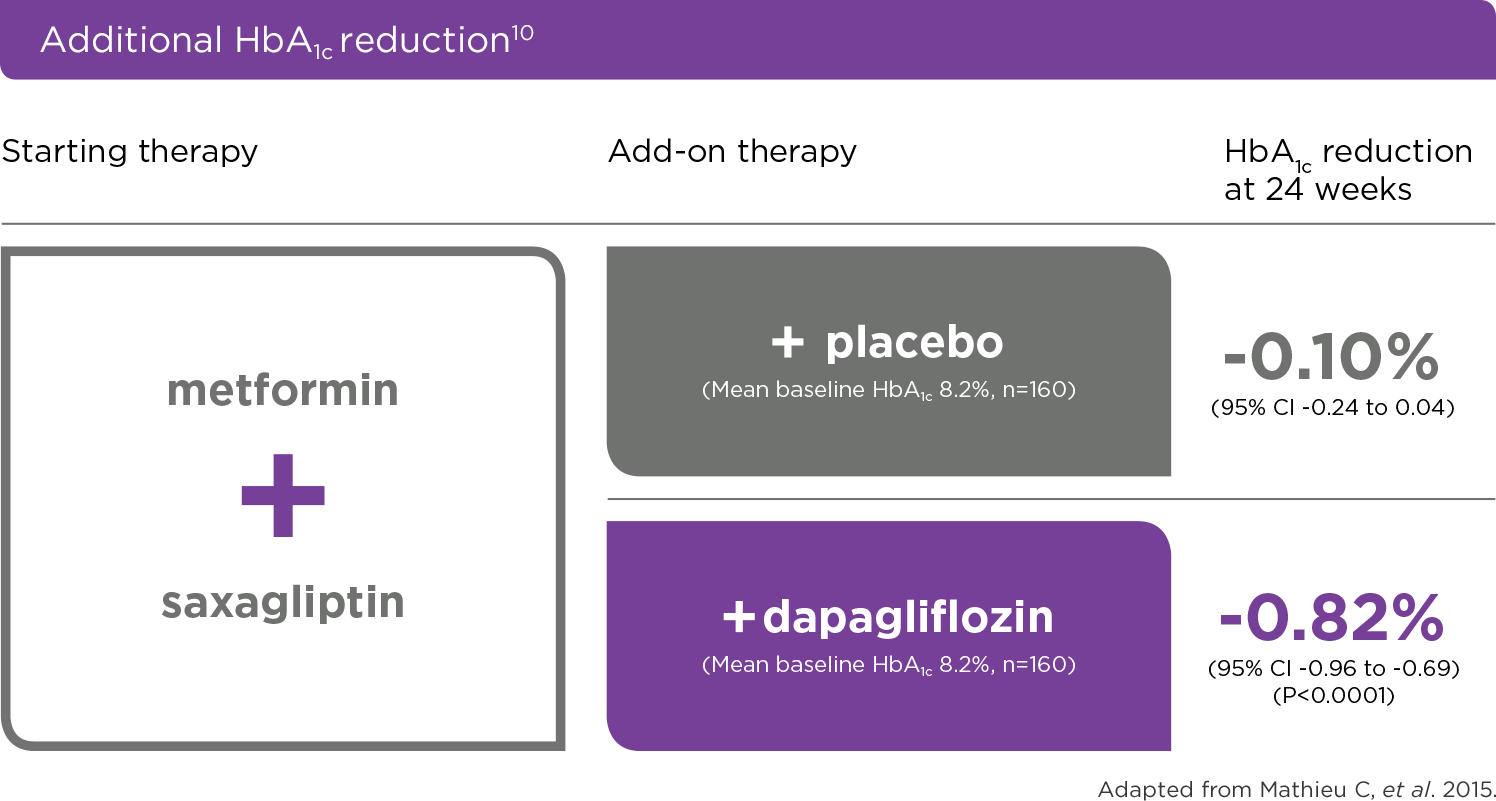 *QTERNTM is not indicated for the management of weight loss or high blood pressure. Weight change was a secondary endpoint in clinical trials.1

The primary endpoint was the mean change from baseline in HbA1c level after 24 weeks of double-blind treatment with dapagliflozin versus placebo add-on to saxagliptin plus metformin. Secondary endpoints were the mean change from baseline at 24 weeks in FPG level, 2-h postprandial glucose (PPG) level following a liquid meal tolerance test (MTT), body weight and the mean proportion of patients achieving a therapeutic glycemic response, defined as an HbA1c level of <7.0% (53 mmol/mol), after 24 weeks. The composition of the liquid MTT was dependent on the investigational site and consisted of 360-375 kcal, 14.0-28.2 g of protein, 10.5-14.0 g of fat, and 42-45 g of carbohydrates; 16.8-22.0 g of sugars as a component of carbohydrates. Other endpoints included the proportion of patients rescued or discontinued from the study for lack of efficacy, the change from baseline in the PPG area under the concentration-time curve from 0 to 180 min (AUCO-180 min) during a liquid MTT, and the change from baseline in serum lipid levels.

I am not a UK Healthcare Professional

Welcome to the AstraZeneca Medicines Site

Sorry, your web browser is not supported

Unfortunately, you are using an unsupported browser. Please use Google Chrome 52.0 or Internet Explorer 11 or later. Apologies for any inconvenience.

Cancel
Back to top