The PLATO study compared BRILIQUE (ticagrelor) (180-mg loading dose, 90mg twice daily thereafter) and clopidogrel (300-mg to 600-mg loading dose, 75 mg daily thereafter) for the prevention of thrombotic CV events (CV death, MI, or stroke) in 18,624 patients admitted to hospital with an ACS with or without ST-segment elevation. Patients were treated for at least 6 months and up to 12 months.4

BRILIQUE (ticagrelor) – the only oral antiplatelet with evidence demonstrating a statistically and clinically significant reduction in CV mortality at 12 months compared to clopidogrel in patients with ACS.4,16

The PEGASUS-TIMI 54 study compared BRILIQUE (ticagrelor) (90 mg twice daily or 60 mg twice daily) vs. placebo, each given with low-dose aspirin, for the prevention of thrombotic CV events (CV death, MI, or stroke) in 21,162 patients ≥50 years of age with a history of MI (1 to 3 years prior to randomisation) and at high risk* of another atherothrombotic event.15

Following an MI, your patients remain at high risk of further CV events for up to 5 years 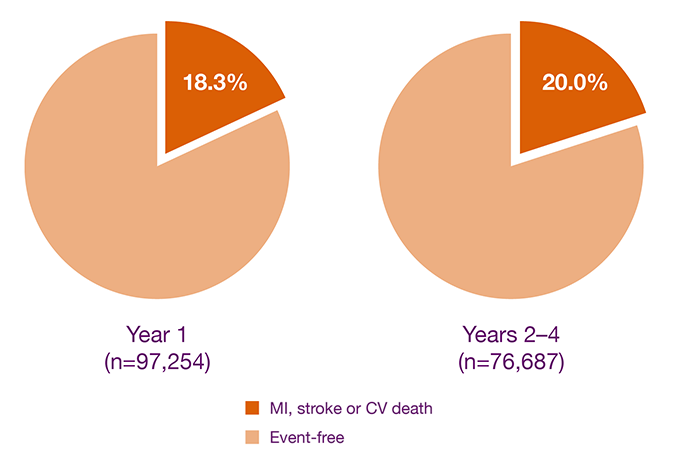 Cumulative risk of MI, ischaemic stroke or CV death during the first year after the index MI and in the subsequent 3 years in the Swedish population. Adapted from reference 17.

Cumulative CV risk in the overall population, in high-risk patients matching the PEGASUS-TIMI 54 inclusion and exclusion criteria, and in the placebo arm of the trial. Adapted from references 15 and 19

a  Bleeding (fatal, severe or intracranial) risk was 2.3% in the overall study population and 3.0% in PEGASUS - patientlike, vs 1.06% in the PEGASUS-TIMI 54 placebo arm (TIMI major bleeding). 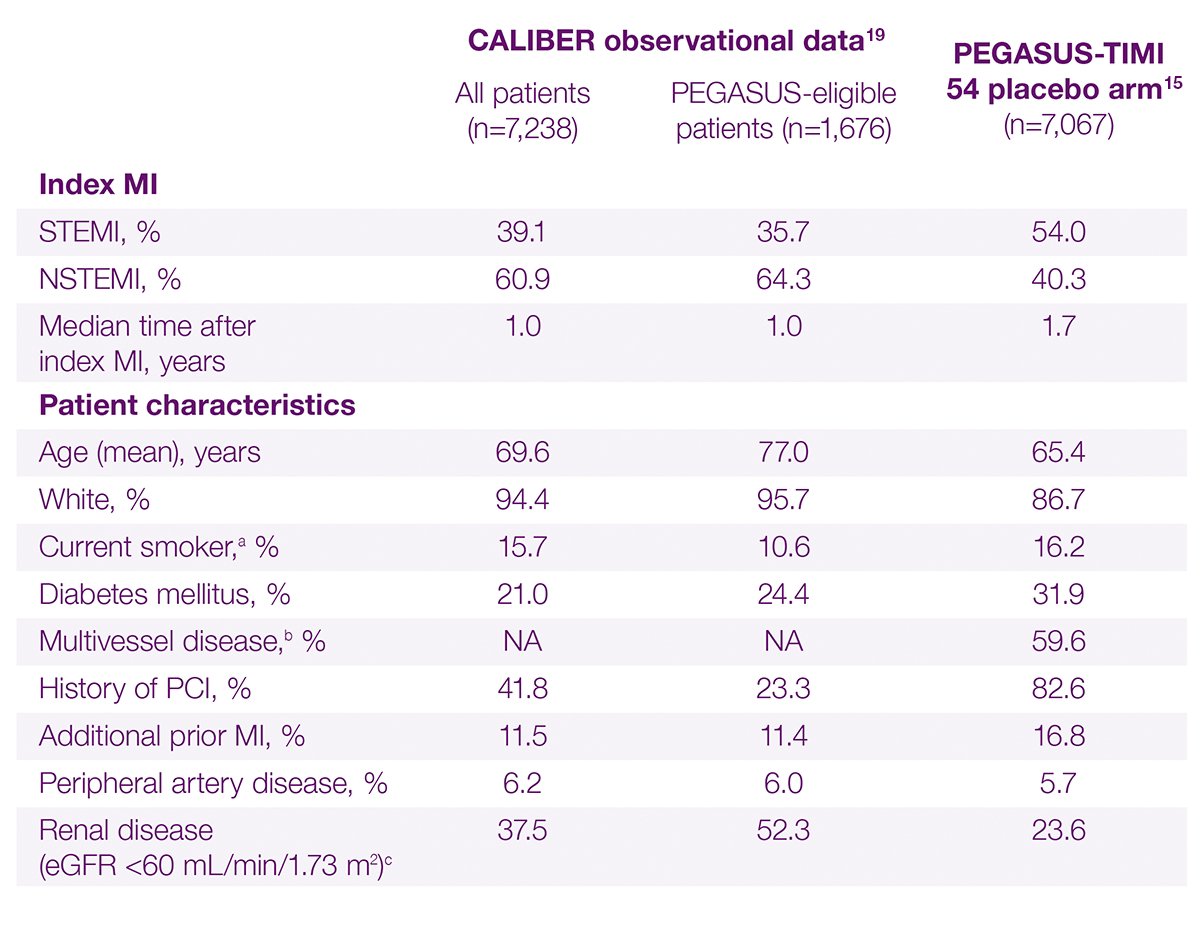 Key baseline characteristics of the CALIBRE and PEGASUS-TIMI 54 populations. Adapted from references 15 and 19.

a Information was available for 94% of patients.
b Multivessel disease was not coded in the CALIBER registry, but it was identified as an important risk factor for further CV events in the Danish registry study.18
c Information was available for 88% of patients.
eGFR, estimated glomerular filtration rate; NA, not available; NSTEMI, non-ST-elevation myocardial infarction;
PCI, percutaneous coronary intervention; STEMI, ST-elevation myocardial infarction.

The study included patients admitted to hospital with a primary diagnosis of ACS between April 2005 and March 2010, who survived for at least 1 year after the index MI (n=7,328). A subpopulation of high-risk patients who met the PEGASUS-TIMI 54 trial inclusion (age ≥65,or ≥50 with diabetes, renal disease or a second previous MI) and exclusion criteria was also analysed (n=1,676). Multivessel disease was not coded in the CALIBER registry.

The goal of secondary prevention is to reduce the risk of overall coronary disease progression, not just stent-related events22

Of the 3464 recurrent MIs, 1566 were indeterminate events and could not be classified as NCL or CL recurrent MIs - because no PCI was performed for the recurrent MI or they were not treated in a SWEDEHEART unit or invasively evaluated.

BRILIQUE (ticagrelor) 60 mg twice daily is the recommended dose when an extended treatment is required for patients with a history of MI of a least 1 year and a high risk of an atherothrombotic event. There is limited data on the efficacy and safety or ticagrelor beyond 3 years of extended treatment.

This analysis was an observational cohort study using prospectively collected data from SWEDEHEART and the Swedish National Board of Healthcare registries.

The study population consisted of 44,332 out of 108,615 patients hospitalised for STEMI or NSTEMI who had a culprit lesion identified at baseline by coronary angiography (between 1 July 2006 and 29 November 2014). During follow-up (median 3.2 years) re-MI occurred in 3,464 patients. Of those patients, the infarct originated from a ‘non-culprit’ lesion in 1,243 patients, from a ‘culprit’ lesion in 655 patients and 1,566 re-MIs could not be classified as ‘non-culprit’ or ‘culprit’.

Time to first occurrence of primary efficacy endpoint: Composite of death from vascular causes, MI or stroke at 12 months4 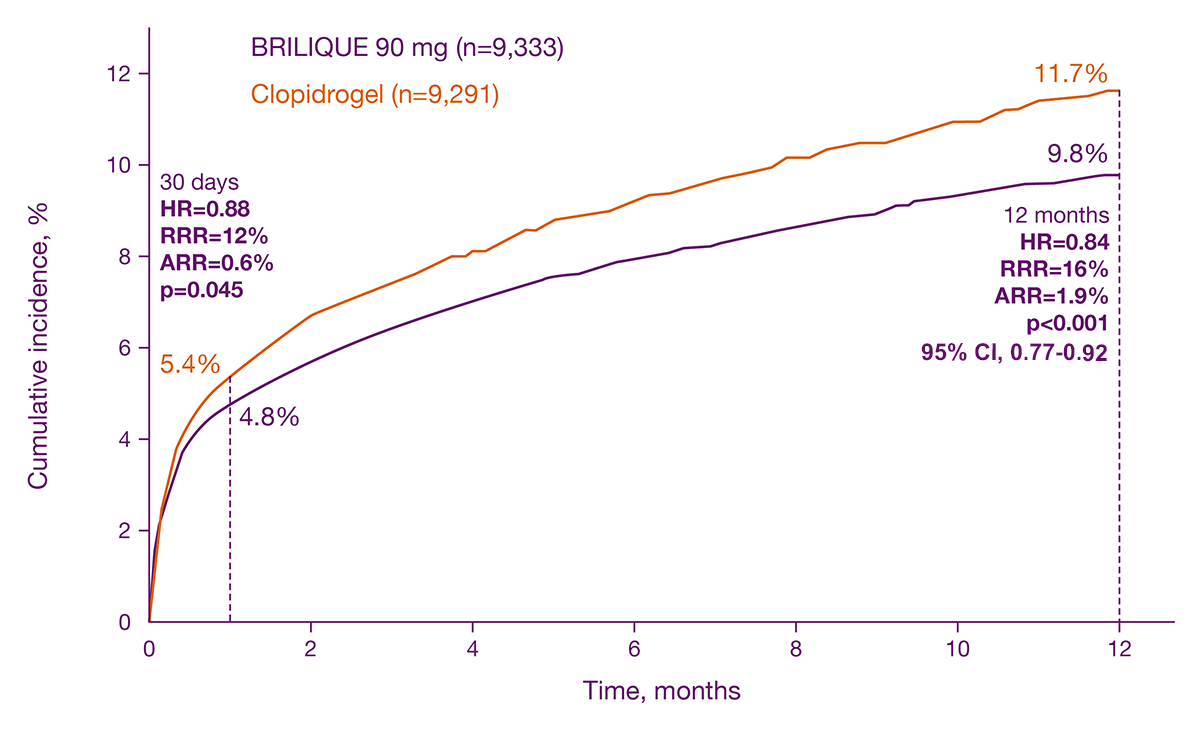 Analysis at 30 days is an exploratory endpoint

Analysis at 30 days is an exploratory endpoint

More than half of the absolute risk reduction with BRILIQUE (ticagrelor) occurred after 30 days treatment, and continued to diverge from that of clopidogrel over 12 months of continuous therapy.4 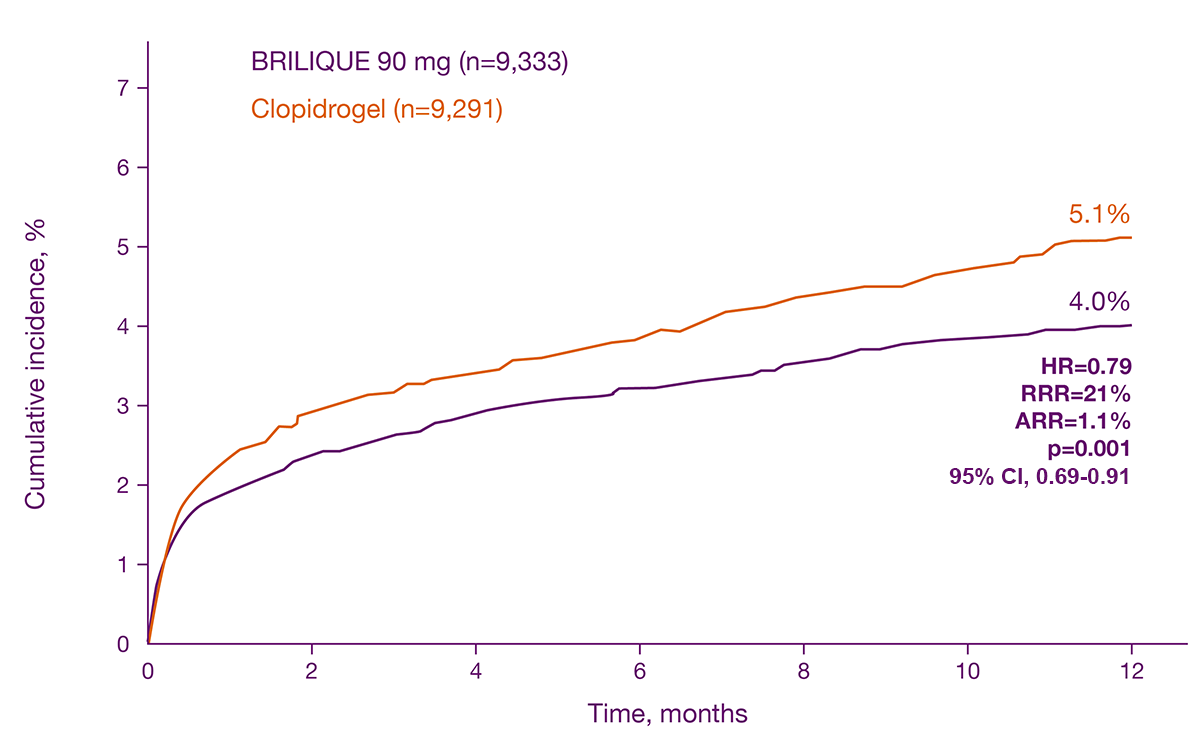 There was no significant difference in total major and fatal bleeding despite improved efficacy vs. clopidogrel4

Non-CABG related major bleeding was higher with BRILIQUE (ticagrelor) than with clopidogrel (PLATO criteria: 4.5% vs 3.8%, p=0.03)4

Bleeding definitions in the PLATO study 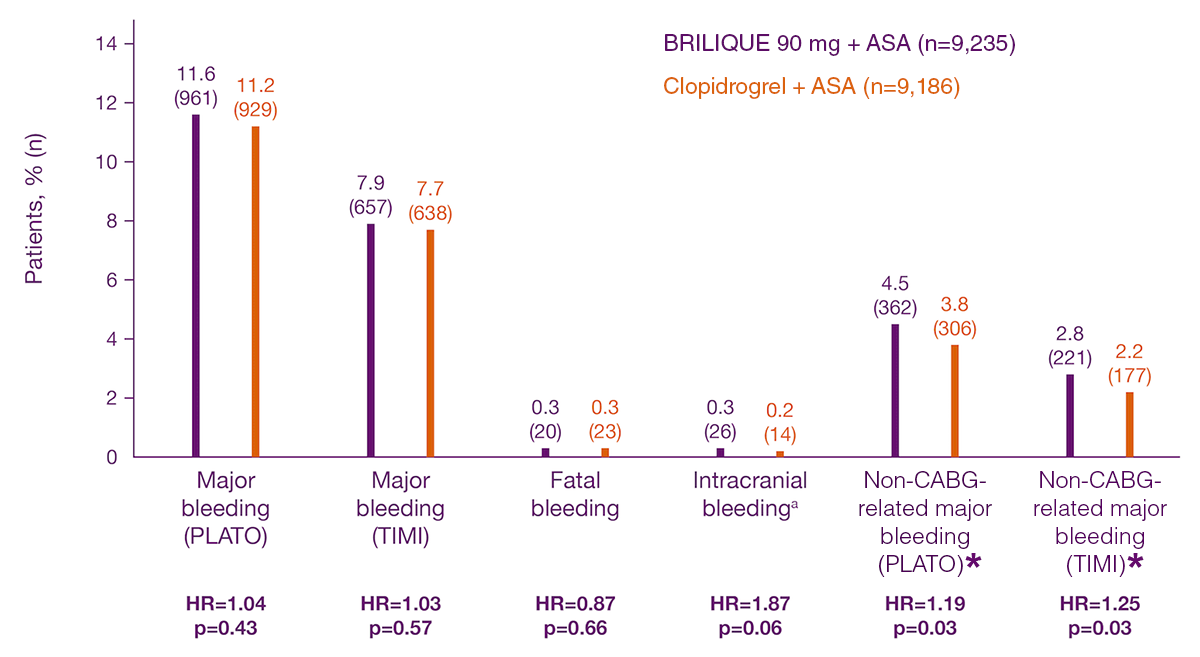 *Secondary safety endpoints of the trial

The PLATO study was a large, multicentre, double-blind, randomised trial.4 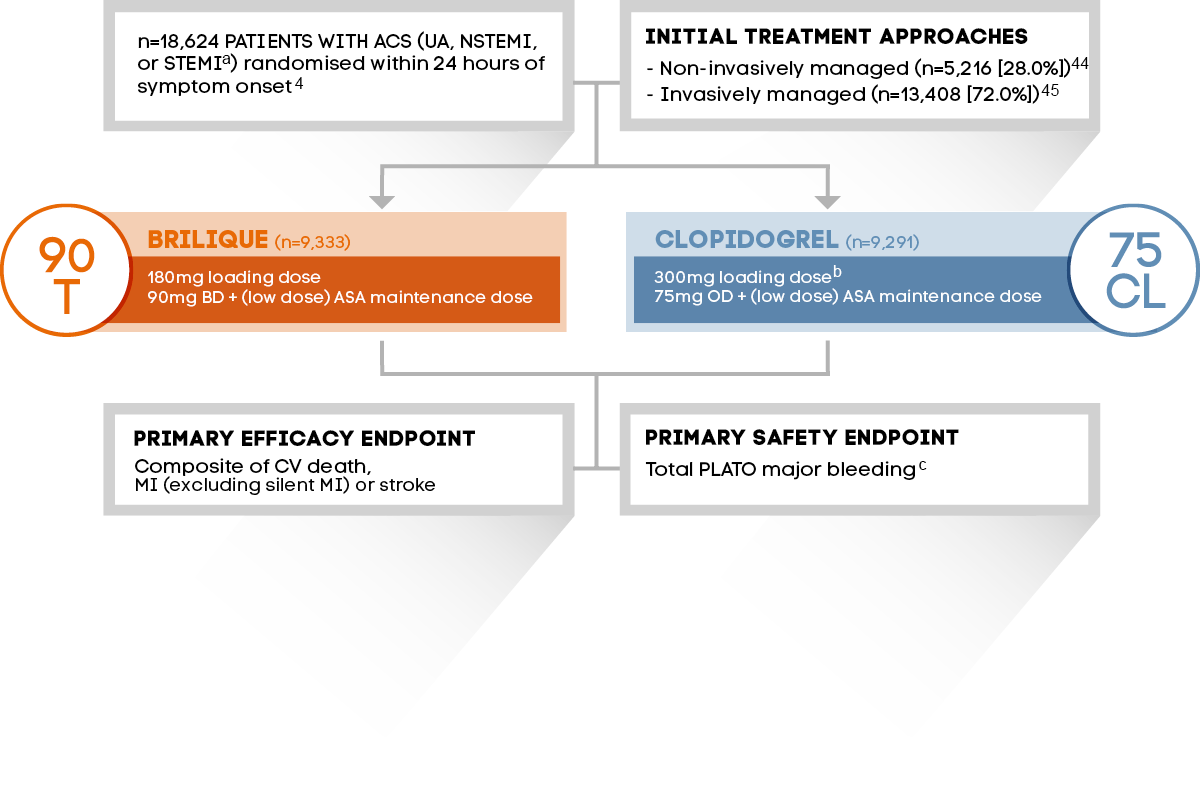 aSTEMI patients for primary PCI were randomised, however, they may not have received PCI
bA loading dose of 300mg clopidogrel was permitted in patients not previously treated with clopidogrel, with an additional 300mg allowed at the discretion of the investigator
cThe PLATO study expanded the definition of major bleeding to be more inclusive compared with previous studies in ACS patients. 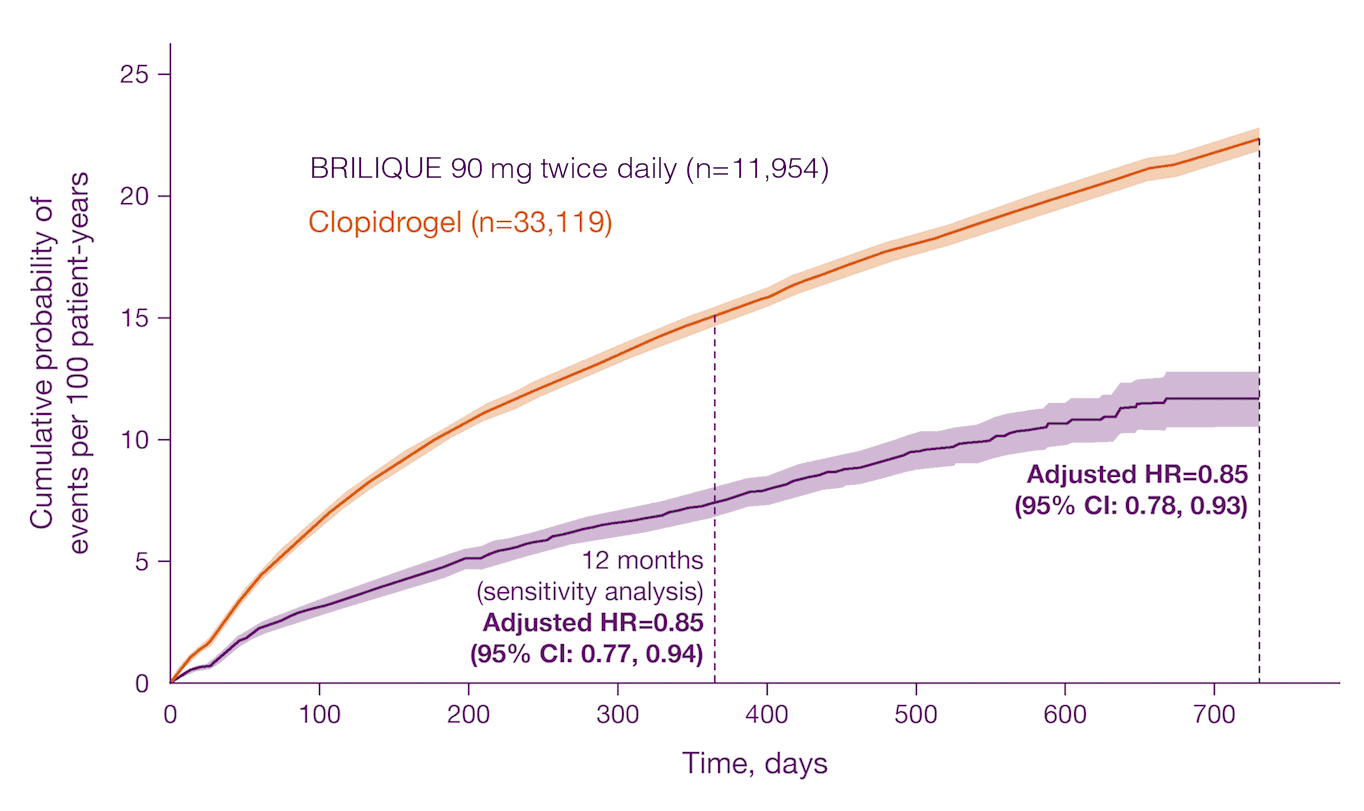 Unadjusted cumulative incidence of MI, stroke or all-cause death (KM estimate) in real-world patients discharged on DAPT with asprin and either BRILIQUE (ticagrelor) or clopidogrel following an MI. Adapted from Sahlen et al 2016 .

Brilique 90 mg twice daily is licensed for 12 months in ACS patients.1 90.9% of patients prescribed BRILIQUE had an intended treatment duration of ≤12 months, vs 75.5% for clopidogrel.25

Prospective cohort study in 45,073 ACS patients enrolled into the Swedish Web system for Enhancement and Development of Evidence-based care in Heart Disease Evaluated According to Recommended Therapies (SWEDEHEART) between 1 January 2010 and 31 December 2013. 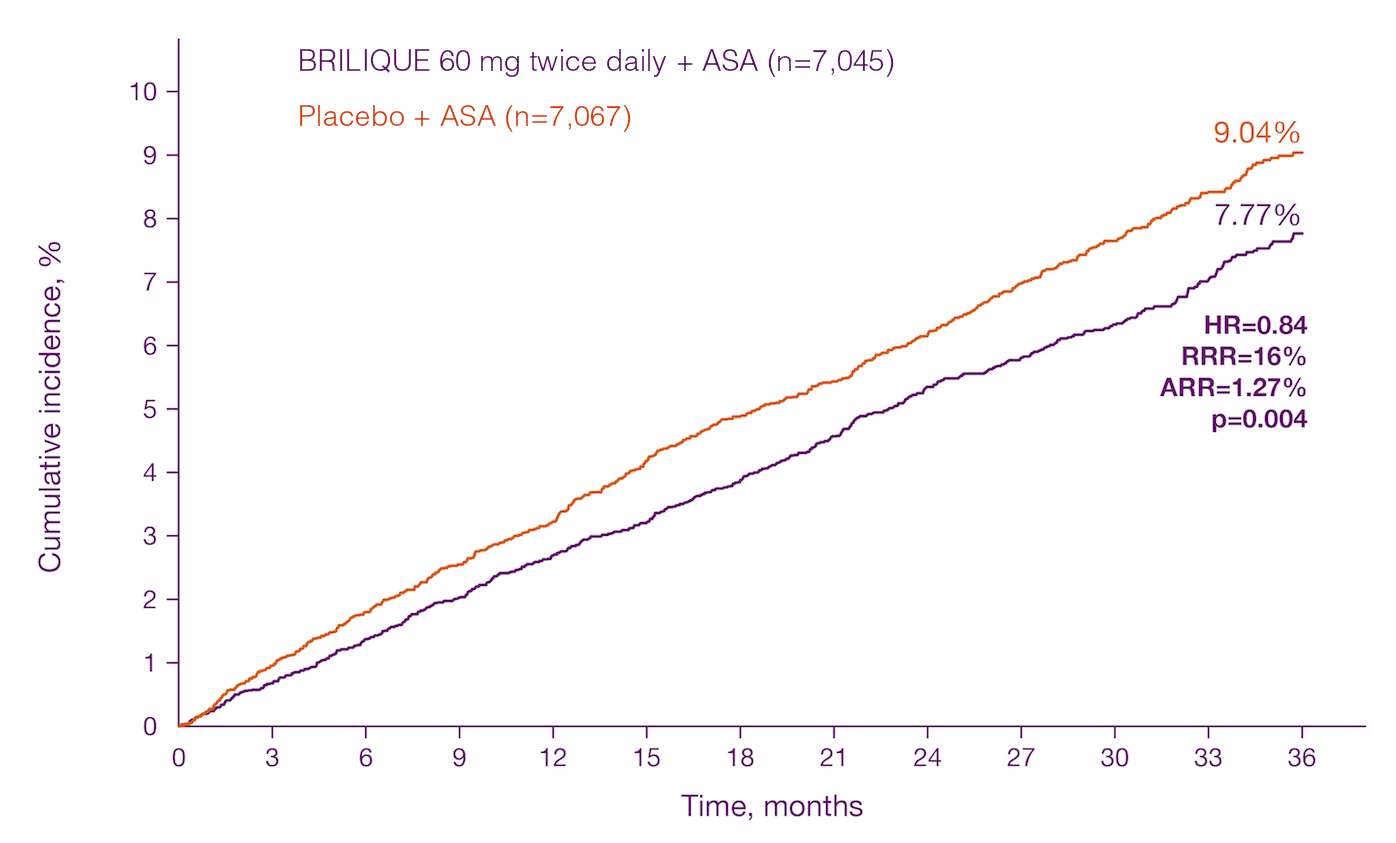 Risk of CV death, MI, or stroke (KM estimate) with BRILIQUE (ticagrelor) and placebo in patients who had an index MI 1-3 years before randomisation. All patients were on background low-dose asprin (75-150 mg/day).

HR and cumulative rates (KM estimate) for the primary endpoint and each of its components in patients treated with BRILIQUE (ticagrelor) and placebo.

BRILIQUE (ticagrelor) 60 mg twice daily is associated with an increased risk of TIMI major and minor bleeding vs placebo.

In PEGASUS-TIMI 54, TIMI major and minor bleedings were more frequent with BRILIQUE vs placebo15

Bleeding events leading to treatment discontinuation were more frequent with BRILIQUE vs placebo (6.2% vs 1.5%, p<0.001)15 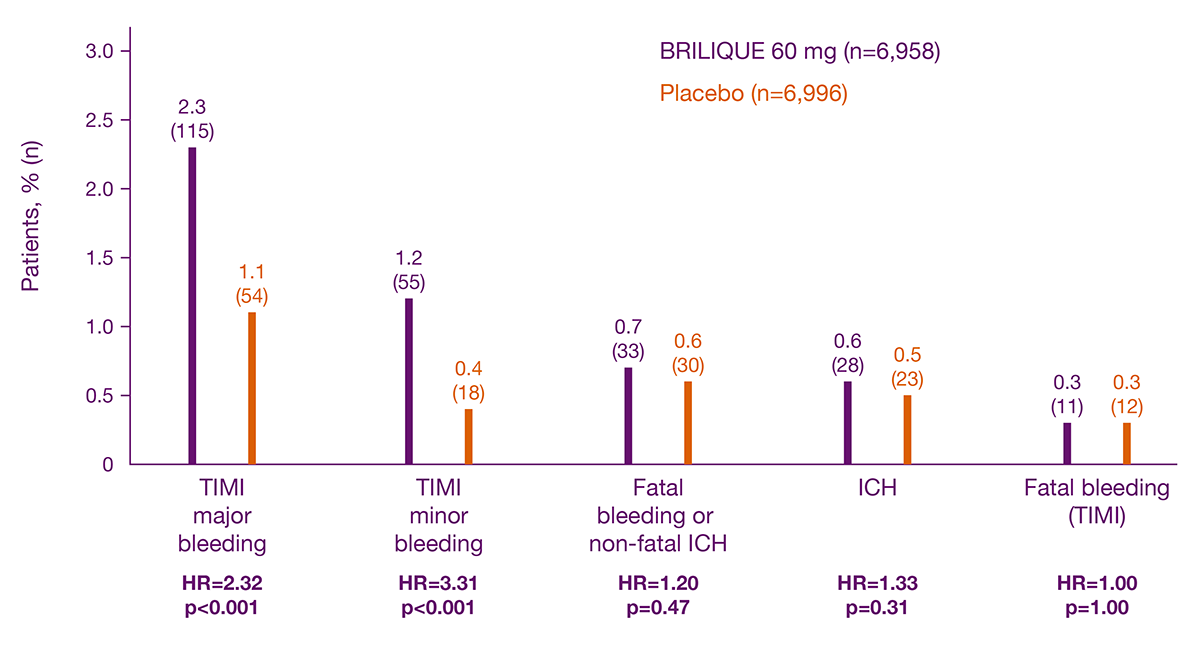 Bleeding rates (KM estimate) with BRILIQUE (ticagrelor) and placebo in PEGASUS-TIMI54. All patients were on background low-dose asprin (75-150 mg/day).15

Discontinuation of treatment due to bleeding was more common with BRILIQUE (ticagrelor) 60mg twice daily compared with ASA therapy alone (6.2% and 1.5%, respectively; p<0.001). The majority of these bleedings were of less severity (classified as TIMI requiring medical attention), e.g. epistaxis, bruising and haematomas.1

Minimal bleed: Any overt bleeding event that does not meet the preceding criteria 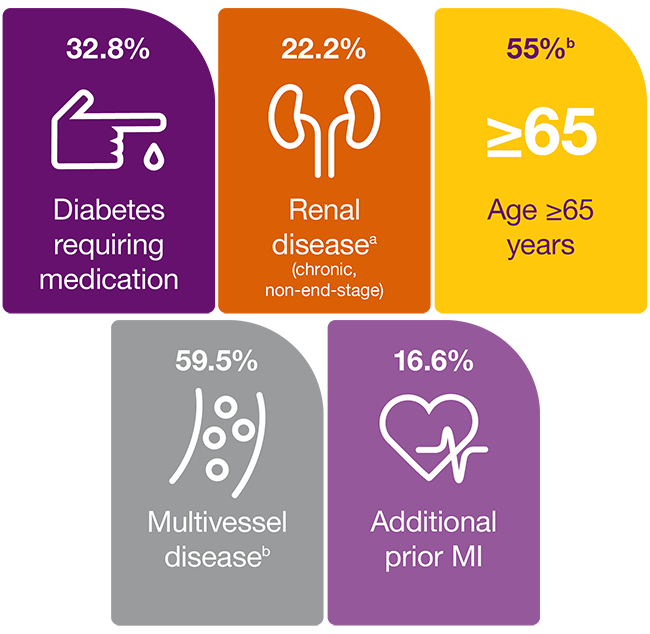 a  Estimated creatinine clearance <60 mL/min.
b  Based on an interim snapshot of the data, after completion of enrollment but during ongoing trial and data cleaning9 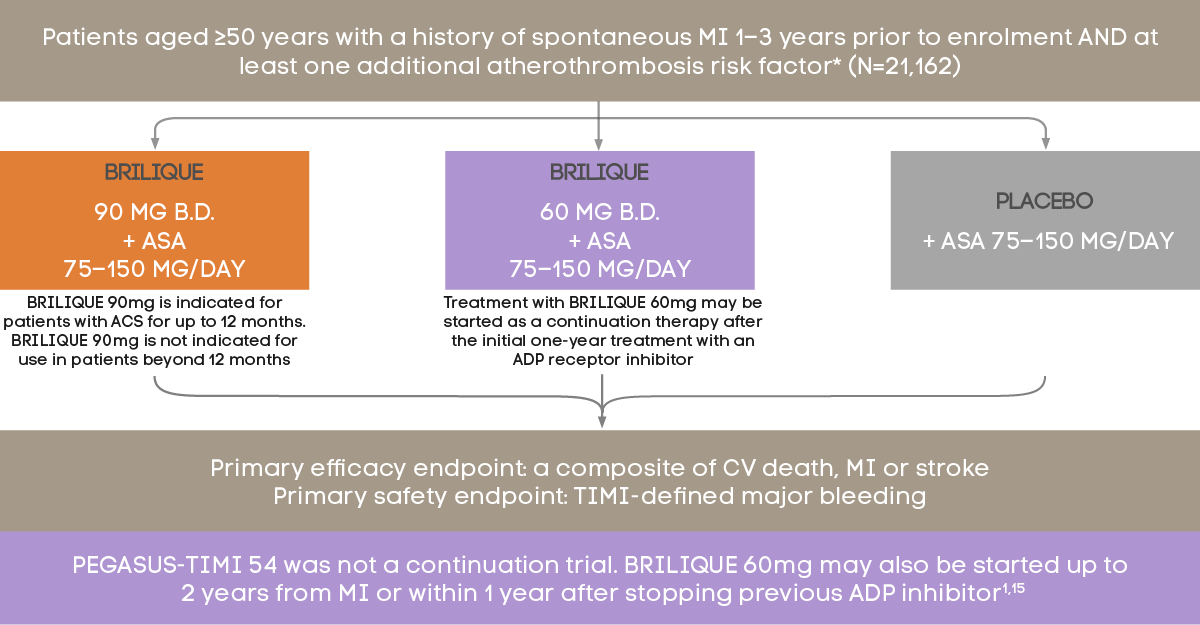 From PEGASUS-TIMI 54 to the EU Label: Refining the patient population

The PEGASUS trial included patients who were at between one and three years post MI.  The licence for the 60mg dose of ticagrelor states that patients must be within 2 years post MI or within 12 months of P2Y12 inhibitor withdrawal.

Therefore, the EMA proposed that AstraZeneca conduct a post-hoc analysis of the patient population within the PEGASUS trial that met our licensed indication.  This data is the “EU label analysis”. 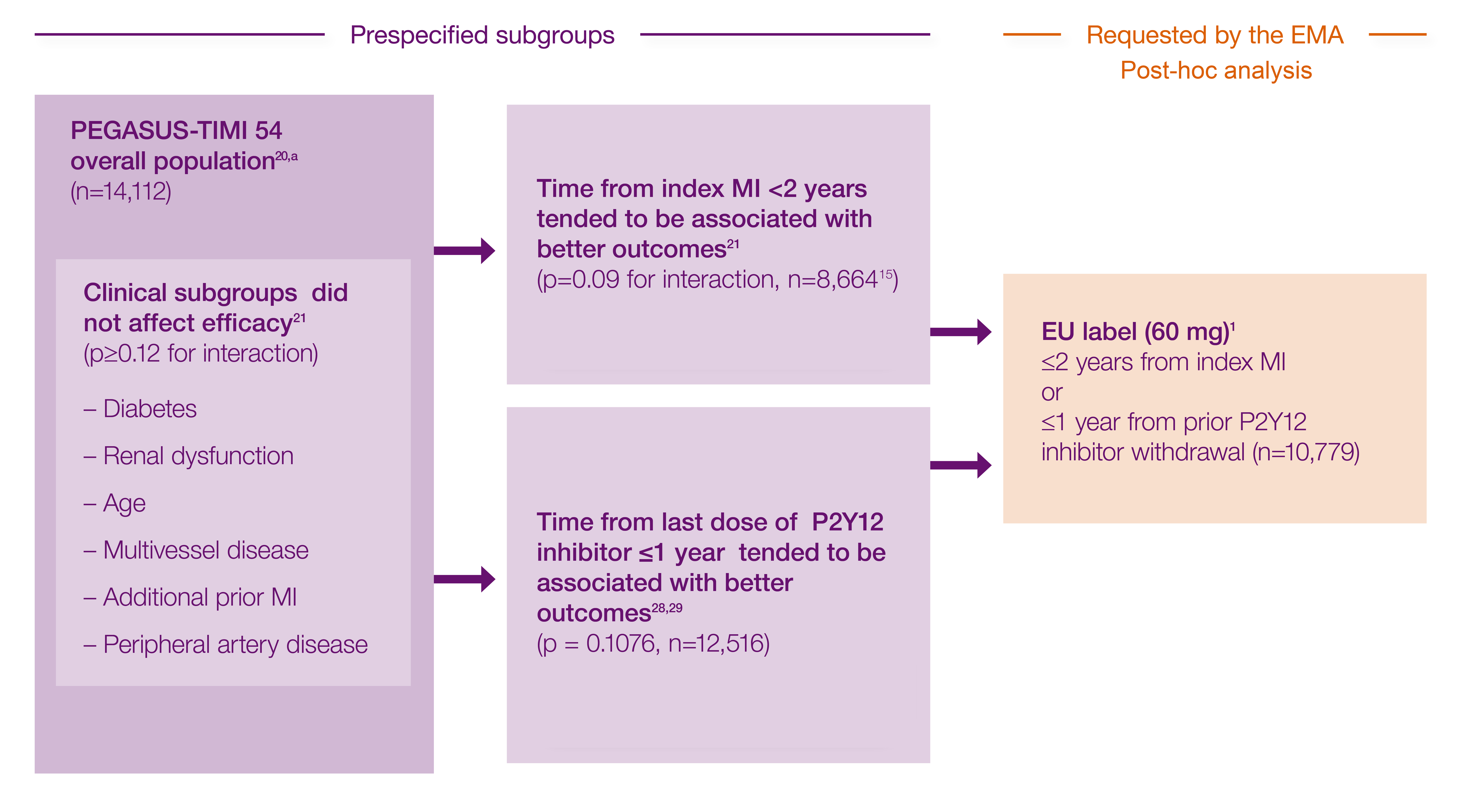 HR and cumulative rates (KM estimate) of the primary endpoint and TIMI major bleeding with BRILIQUE vs placebo by time to index MI in PEGASUS-TIMI-54 (prespecified subgroup analysis). Adapted from reference 28.

HR and cumulative rates (KM estimate) of the primary endpoint with BRILIQUE vs placebo by time from P2Y12 inhibitor withdrawal at randomisation in PEGASUS-TIMI-54 (prespecified subgroup analysis). P-value for interaction pooled across both doses is <0.001.

Bleeding risk was higher with BRILIQUE 60mg vs placebo

The risk benefit profile of Brilique (ticagrelor) 60mg vs placebo in the EU label is consistent with the overrall PEGASUS TIMI 54 population.15,32

Summary of efficacy and safety outcomes with BRILIQUE and placebo in the overall and EU label populations from PEGASUS-TIMI 54.

Prespecified subgroup analysis of PEGASUS-TIMI 54 investigating the pattern of ischaemic risk and the consistency of the efficacy and safety of BRILIQUE over time. 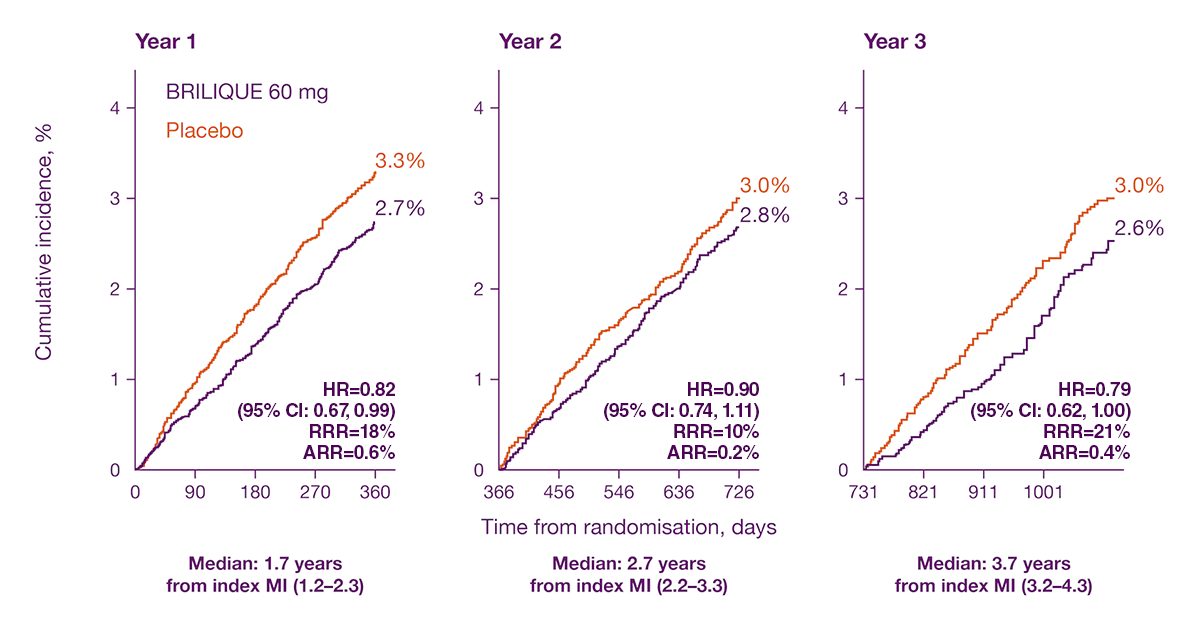 a There are limited data on the efficacy and safety of BRILIQUE 60 mg beyond 3 years of extended treatment. 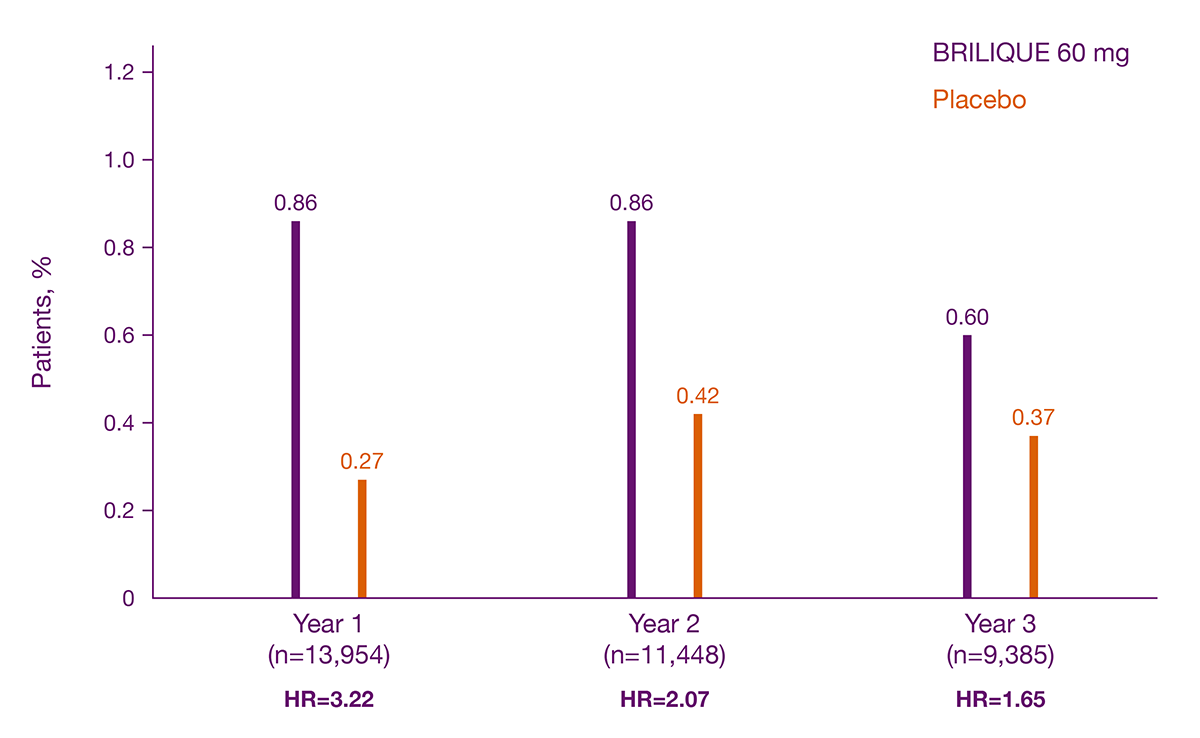 TIMI major bleeding in the PEGASUS-TIMI 54 trial analysed year by year. Only patients who were alive and event-free at the start of each time period were included (on-treatment analysis).

Safety analyses by definition are in patients still on study drugs and therefore, select for a cohort who has tolerated therapy. Thus, the trend for a diminished bleeding risk over time likely reflects selection of patients who have maintained therapy without intolerable bleeding. 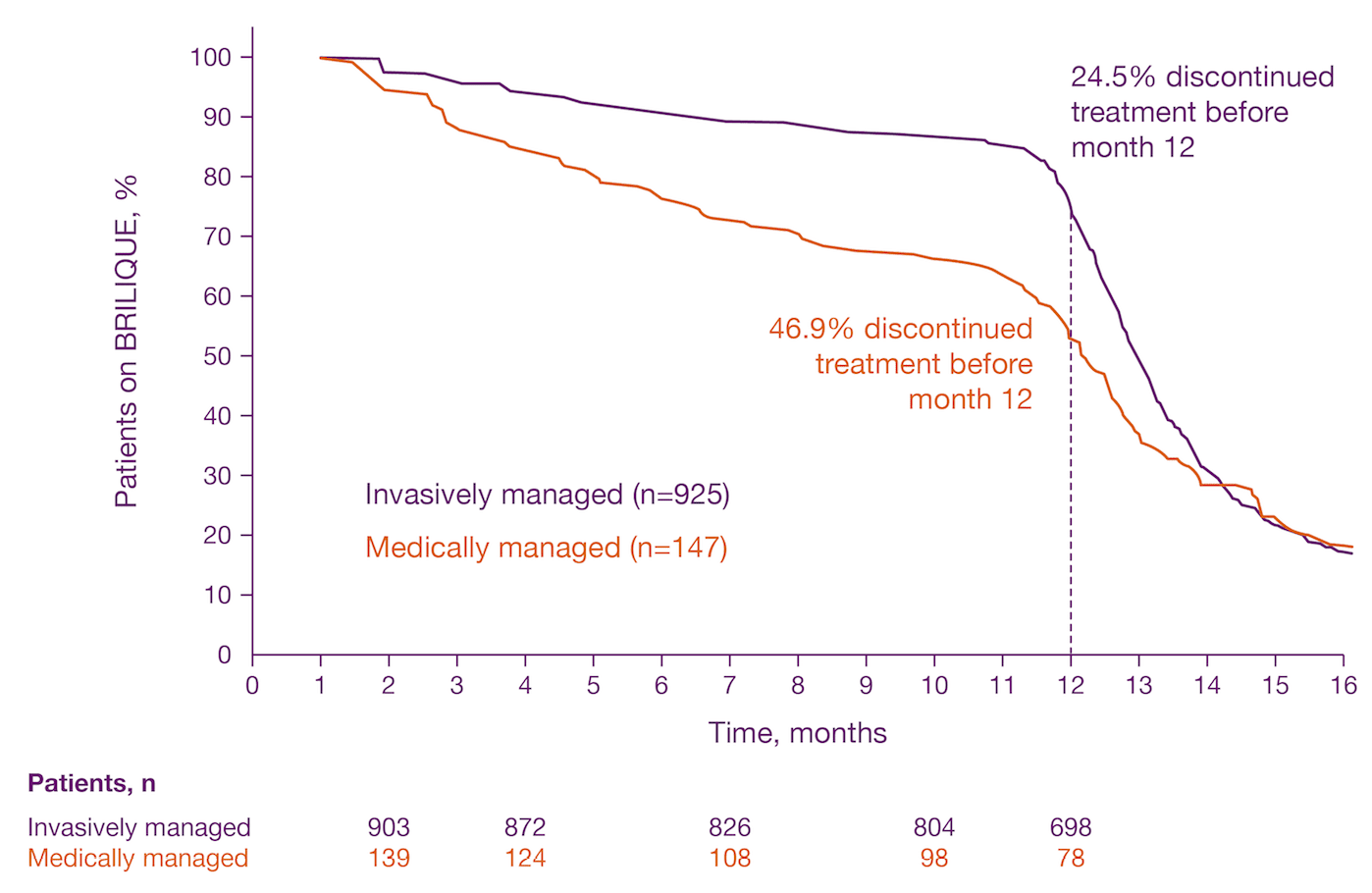 Analysis of patient persistencea on BRILIQUE (ticagrelor) 90 mg over 15 months in ACS patients in primary care. Data from the CPRD database. The x-axis begins at month 1 as only primary care prescriptions are included (assuming 1-month hospital supply on discharge)34

Analysis of prescription data from English GP practices within CPRD that are linked to Hospital Episode Statistics data, including patients with a first primary care BRILIQUE prescription issued between December 2010 and March 2015. A 1-month prescription of BRILIQUE from the hospital at discharge was assumed.

Reminder: The discharge letter should include clear start/stop dates of DAPT treatment and clear communication of transition of care to GPs where appropriate

*Data based on patients entered in to the PARIS registry where 69% of patients were recommended DAPT for 1 year and non-compliance was disruption of DAPT before the recommended 12 months.

Study enrolled adult patients (aged 18 years or older) undergoing successful stent implantation in one or more native coronary artery and discharged on DAPT. Thienopyridine on discharge was clopidogrel in over 90% of patients.

I am not a UK Healthcare Professional

Welcome to the AstraZeneca Medicines Site

Sorry, your web browser is not supported

Unfortunately, you are using an unsupported browser. Please use Google Chrome 52.0 or Internet Explorer 11 or later. Apologies for any inconvenience.

Cancel
Back to top